In English class, we were told to write a memoir. I found the task hard, because my life is a boring one. I finally chose a topic: when I broke my teeth. Here is my memoir, and I hope you enjoy!

I heard a bang, and then all I saw was black.

I was in Costa Rica with my family and my cousins. We had been having a great time up until that, and I was pretty happy. We were in the rain forest, and I could smell faint dampness in the air. We were staying in a pretty cheap hotel where we had our own little house. It had the most beautiful view of the forest. On that day my mom and aunt went to get the groceries, and my dad was in the shower. Me and my siblings, Talia and Jordan, went over to my cousin’s house.

Their house was very close by, so I didn’t take my shoes. I heard the screams from outside. I knew the moment I stepped into the house, this would be either awesome or terrible. My two cousins, Maddie and Mickie, were in a very big fight over a stuffed animal. They were both screaming at the top of their lungs: “It’s mine!” said Maddie. “No, it’s a he, and he’s mine!” said Mickie. That is how it went for a few minutes until they realized we were there. “Heyyyyy…” I said, somewhat embarrassed to have been listening to that. They ignored us and started whacking each other with pillows. Then my uncle joined the fray. “Pillow fight!” he screamed over them. He grabbed a pillow and then everyone just started whacking everyone. It was full-on war.

Pillows were flying everywhere. I didn’t know how I had gotten myself into this, but now that I was, there was no turning back. I smacked my pillow into my brother and ran around the room. I saw that one of the corners had a mini fridge, so I went over there. I felt a pillow hit me in the back of the head, I saw the mini fridge getting closer and closer until I saw it just inches from my face,there was a searing pain in my mouth, and then there was black.

After a minute, I saw a bunch of blurry faces standing over me. They were shouting words that I could not, or would not, understand. I was carried out of the house by my uncle to my dad, who was still in the shower. He came out right away, and I was still a bit hazy about what happened. I felt something weird in my mouth, though. I could hear my uncle explaining something to my dad, so I cleared the ringing in my ears and tried to listen in. “…and then there was a pillow fight, and I lost track of what happened, but I saw Jordan hit the back of Mara’s head into the fridge in the corner.” So that’s what happened, I thought. My dad asked me if I was ok, and I was about to respond when I turned the thing in my mouth over. I had tasted it somewhere before. I spit it out and had a good look at it. It was a kind of yellowish whitish colour. It had a weird shape to it too. It looked kind of like… “is that a tooth?” exclaimed my uncle. “No,” said my dad, who is a dentist. “If it is… it is only a part of a tooth.” I opened my mouth to respond, and my dad gasped. “Mara,” he said, “you might want to see this.” He handed me his phone, and I switched it to the camera. I didn’t see what they were talking about, only a little bit of blood on my lips. “Look at your teeth, Mara.” said dad. I opened my mouth and gasped. The gasp hurt, but I was too focused on my teeth. “What happened?” I asked in horror.

My front two teeth were broken. They were completely cracked in half. “Your front two incisors are the ones that broke.” my dad told me.I was trying and failing to stop the tears from falling down my cheeks. One stubborn one slipped away, and I was quick to wipe it off. “Why did it hurt when I gasped?” I asked. “Well,” explained my dad, “Your teeth broke at the root, which houses the nerves in your teeth. Your root is exposed, which means that you will be very sensitive to anything hot or cold.” “When will I get it fixed?” I demanded. “I don’t know, Mara. I don’t know.”

The rest of my trip was hell. It was Christmas, and none of the dentists were open. I had to drink out of the corners of my mouth, and it hurt even then. I had to deal with all of the looks, all of the comments. When I finally got home, I had to go straight to my dad’s office. There he bonded (Filled in) my teeth. He told me they were fixed, but that was not the case. My teeth hurt like hell whenever I drank anything cold. I had to drink room temperature water, which might have been the worst thing that had ever happened to me. It tastes dirty somehow. I kept telling my dad that my teeth hurt. We went around and around. “ I’m telling you, my teeth hurt!” “Stop being a baby and perk up!” This went on for about a year, when I finally couldn’t take it. I had a considerably bad pain in my teeth on the day of the CAT 4. As soon as the test was over, I went down to the office, and told Ellie to call my dad. I explained the problem, again, and he told me that my Zaydie would be coming to pick me up.

On the way to my dad’s office, I explained the problem to my Zaydie. “Sounds like you need a root canal.” he said. And he was right. When we got to the office, my dad looked again. He gave me these glasses that you plug into your phone and you can watch a movie. I watched Mission Impossible 1. It was a really good movie.  He also froze my teeth so it wouldn’t hurt, but I could still hear it. It sounded like nails on a chalkboard. After it was done, he put something in my mouth. It tasted like mint, but it was not too strong. I was sent back to school with a frozen mouth for the rest of the day. The End.

I chose this topic because it is one of the two biggest most monumental things that has happened to me. It was a big moment in my life, and it showed me how to stand up for myself, and how to get my brother in trouble. One of the lessons you can learn from my memoir is that brothers are terrible. He didn’t even get in trouble! If you are reading this, thank you, because I know that it was a long and hard story to get through. Now, I think that I’ve written enough for one day. Bye!!!

Over the break, my family and I went to our cottage. We went skiing, tobogganing, and skating. For a week, we were by ourselves, staying inside, playing board games, and painting. My mom got my siblings and I a paint by number, so we had fun doing that. After that week was over, my cousins came up. They have their own cottage on the same lake as ours. When they got there, we did EVERYTHING. Every day felt like a week. I had so much fun! We also went tubing with my mom’s two best friends. One of the things that I did not like on the break was the walking. My Uncle and Aunt recommended a walk, more like a hike, in the woods. They said that it took 45 minutes. Ya right. Like that happened. If you have read my brother’s assignment he said, and I am not joking, he “valiantly led us to civilization.” He was the one who got us lost! We also walked (read: our parents made us walk) to our cousins house. They live about 45 minutes each way, it was pouring rain, freezing, and generally horrible. It was as fun as jumping in a lake in the middle of winter. Our cousins challenged us to write a song, so we did. It is to the tune of Jingle Bell Rock.

Mara’s in pain and Jordan complains,

Slipping and skiing, and we’re in despair,

In the foggy air!

What an icy time it’s the Cristy time, to walk the day away,

That’s what happens when we don’t go away!

It’s Christmas Day Santa get us on your sleigh

are you sure this is the way

On this deplorable walk

Whiny to the core

We can’t walk any more

Kicking the rocks wait there’s blood in my socks

How long til we go in.

And maybe a poutine

Another thing that I had to mention was the food. It could have been cooked by Gordon Ramsey. With my mom’s stelar cooking, and my Aunt’s, I probably gained 5 pounds in a week. We had Beef Wellington, steak, chicken, fish, hamburgers, hot dogs, we probably had all of the food in the world! You know how people sometimes say “less is more”. This is not the case.

There is one other memorable activity I would like to mention. It happened when we went tobogganing. So, because we are really smart, we said, you know what? Let’s go down the hill in a pyramid. Obviously, it didn’t end well. BANG! We crashed right into the guard rail! Talia and Jordan, my siblings, suffered minor injuries.  My break was fun, even if we did not go anywhere hot.

In social studies, we did a project about equity and equality. In social studies, we are doing a programme called Children First Canada. For this project, I did a video on a platform called Powtoon. Here is the link to our video. Audrey wanted to do a play, but I wanted to do a comic strip, so we compromised and did a sort of video comic strip. Here is a link to her blog. Check it out! I really loved learning about equity and equality, because I didn’t know about it before.

Hi, this is my project on socio-economics. Hopefully, you will be able to read it. I hope that you like it! 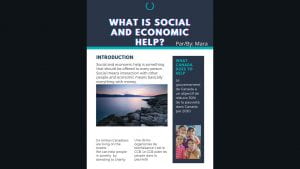 Caution: Do Not Watch Unless You Want Your Mind To Be Blown!

Hi, it’s me again. I know, yes, I’m boring. If you are still here, you must either find me interesting, (very unlikely) or you might be forced to be reading this. I am going to actually talk about what I am supposed to talk about. Here goes. What you see below is me talking about the rocket that I made in science class. (I know, super embarrasing.) I wored a lot on reaserching about rockets, and alterations that I could use. I learned how to make a rocket, and what forces matter to rockets. I will post soon! Please keep reading them!

Category: Edublog Challenge | 7 Comments on Caution: Do Not Watch Unless You Want Your Mind To Be Blown!